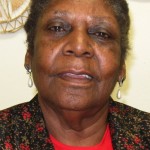 Ruby Sutton moved to Dubuque in 1959 with her family who happened to be one of only five African-American families at that time. Ruby served for 36 years as the outreach manager of the Operation New View Community Action Agency and 21 years on the Dubuque Human Rights Commission. Among her many recognized accomplishments Ruby Sutton received Dubuque’s Telegraph Herald’s First Citizen Award in 1984, YMCA Women of Achievement Award in 1987 and on November 13, 2009 in Dubuque, IA, it was declared “Ruby Sutton Day.” “Ruby has been leading voice for change around issues of racial justice and poverty” – Michael Van Milligen

In 1989, Ruby Sutton received the NAACP First Humanitarian Award, which was later renamed the “Ruby Sutton Award” in her honor. The Ruby Sutton Award exists to exemplify everything that Ruby stood for such as: positive civic engagement, equality for all, and the fight for racial justice and poverty. It is an honor to receive the Ruby Sutton Award, here are the previous recipients:

*Thank you all for your hard work in upholding and carrying out the principles/initiatives of the NAACP Dubuque Branch!

To nominate someone for the Ruby Sutton Award please feel out the form below: